A sacrament is an outward sign by Jesus Christ to give grace. 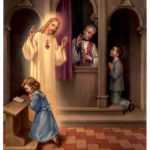 To baptize means to “plunge” or “immerse;” the “plunge” into the water symbolizes the catechumen’s burial into Christ’s death, from which he rises up by resurrection with Him, as “a new creature.” (#1214)

Those who approach the sacrament of Penance obtain pardon from God’s mercy for the offense committed against Him, and are, as the same time, reconciled with the Church which they have wounded by their sins and which by charity, by example, and by prayer labors for their conversion. (#1422)

The Holy Eucharist completes Christian initiation. “At the Last Supper, on the night he was betrayed, our Savior instituted the Eucharistic sacrifice of His Body and Blood.  This he did in order to perpetuate the sacrifice of the cross throughout the ages until he should come again, and so to entrust to His beloved Spouse, the Church, a memorial of his death and resurrection: a sacrament of love, a sign of unity, a bond of charity, a Paschal banquet in which Christ is consumed, the mind is filled with grace, and a pledge of future glory is given to us.” (#1322 and 1323)

The reception of the sacrament of Confirmation is necessary for the completion of baptismal grace.  For “by the sacrament of Confirmation, [the baptized] are perfectly bound to the Church and at enriched with a special strength of the Holy Spirit.  Hence they are, as true witnesses of Christ, more strictly obliged to spread and defend the faith by word and deed.” (#1286)

The matrimonial covenant, by which a man and woman establish between themselves a partnership of the whole of life, is by its nature ordered toward the good of the spouses and the procreation and education of offspring; this covenant between baptized persons has been raised by Christ the Lord to the dignity of a sacrament. (#1601)

Anointing of the Sick

By the sacred anointing of the sick and the prayer of the priests the whole Church commends those who are ill to the suffering and glorified Lord, that he may raise them up and save them   And indeed she exhorts them to contribute to the good of the People of God by freely uniting themselves to the Passion and death of Christ. (#1499)

Holy Orders is the sacrament through which the mission entrusted by Christ to his apostles continues to be exercised in the Church until the end of time: thus it is the sacrament of apostolic ministry. (#1536)