The purpose of the quilters is to raise money for the Altar Society.  The quilters are special ladies that love to quilt.  Fellowship is also included by the quilters.  They have been quilting for over 40 years.  The quilters meet on Mondays and Thursdays after the 8:15 AM Mass until 2:45 PM.

During the summer of 1981, some members of the Alter Society, who made quilts, decided to make one to raffle off at Septemberfest.  They enjoyed it so much they decided to do it as a fundraiser.  They made a poster and placed it in the vestibule.  The next problem was to find a secure place to quilt.  Velda Prokop “volunteered” her basement at 31st and Vine Street.

As the years went by and as they were working on the 190th quilt, Velda passed away on June 15, 1995 after a long illness.  Her family asked us to keep quilting there until the house was sold.  Lucy Kresbach took over the project and we moved to the basement of MaryAnn Jaro’s home later that summer.

There are now seven quilters.  They do not give quilting lessons, but welcome anyone who would like to join.  Presently there are two quilters from other parishes and once in a while a “customer” decides to start.

According to the “accounting” they have made nearly $40,000 where all proceeds go directly to the Altar Society.

They feel blessed that they can carry on this project for many years. 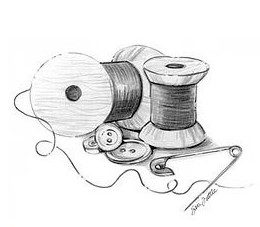 We stop for prayers mid-morning and occasionally have special intentions or pray for someone on the prayer chain.

They do not advertise but always have quilts waiting. They are working on Quilt #436. All proceeds go to Altar Society.