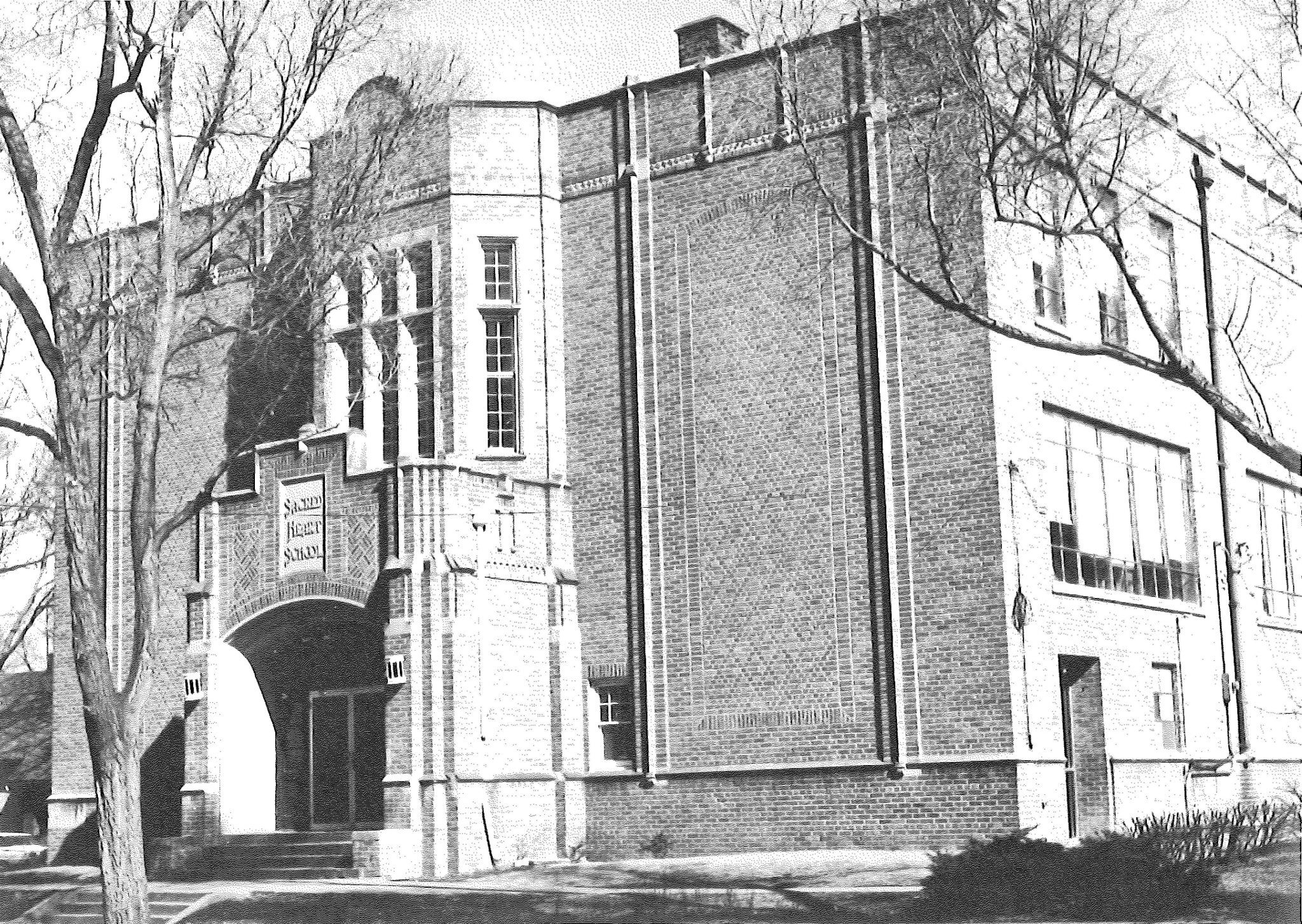 Sacred Heart Catholic School opened on September 9, 1928, with the Sisters of Charity of the Blessed Virgin Mary as teachers.

On September 9, 1928, Sacred Heart Catholic School opened in a new building that was combination church, school, and parish hall. The Sisters of Charity of the Blessed Virgin Mary oversaw the elementary school. The first four sisters to serve Sacred Heart Catholic School were Sisters Saint Peter, Honorata, Rosalia and Annunciation. The enrollment on the first day of school listed 83 children in grades first through eighth. Enrollment continued to increase until it reached its peak in 1958 when 376 students were registered.

During those early years, the sisters experienced an environment that was not always friendly. Within the first week of their second academic year in Lincoln, 1929-1930, the sisters were startled late one evening by someone pounding on the front door of their convent. A hasty glance behind the drawn shades on the windows only intensified their fear. Gathered on their front lawn was a group of Ku Klux Klan in full regalia. One sister hurried to the phone to alert the pastor, Father Raphael Quinn, O.F.M.Cap. He grabbed his gun and responded by promptly firing one shot into the air. The alarming noise was sufficient to send every member of the Klan scurrying off the grounds.
Sacred Heart Catholic School would grow to include Kindergarten and ninth grade. In 1946, when ninth grade was added to the program of studies, additional classroom space became imperative. To fill this need economically, the men of the parish converted four corn cribs into classrooms for the junior high school. The total cost of the site and the material amounted to $6,060.

In 1967, the ninth grade was transferred to Pius X High School. Lack of space made it necessary for another change in 1971, when the seventh and eighth grades were merged with Saint Teresa School.

Each year brought challenges for the faculty of Sacred Heart Catholic School. One of the challenges that required the most ingenuity, patience, and understanding developed during the 1970s. Instead of trying to serve a student body with pupils coming from two or three cultural backgrounds, Sacred Heart Catholic School had a multiplicity of cultures represented among its registrants. There were Africans, Chinese, Cubans, Costa Ricans, Indians, and Vietnamese in addition to children from Thailand and other cultures. Not only was it necessary for the members of the faculty to overcome the language barrier, but there was the challenge of attempting to use cultural differences to enrich the student body rather than separate it into factions. The faculty would pair the kindergarten students with an English-speaking child. Before long, these students were speaking fluent English.

The Sisters of Charity served Sacred Heart Catholic School for more than six decades until May of 1999. One of them, Sister Mary Philip Fitzgibbons, B.V.M., devoted more than 40 years to Sacred Heart Catholic School. Her presence in the school, the parish, and the larger community was a constant in the lives of so many people. This remarkable woman taught her young students the simple and beautify truth of God’s love for them leading by example. During her summers, she taught CCD in parishes across the Diocese in parishes that have no parochial school.

Sister Mary Philips taught two future pastors of Sacred Heart Parish, Father Ronald Patterson, and Father Thomas Walsh. She also taught Father Francis McCullough, O.M.I. and Father Lyle Johnson. In 1986, Sister Mary Philips received the Christa McAuliffe Award for teaching excellence, presented by the University of Nebraska, after being nominated by her former students. On February 22, 1998, she was the recipient of the Cor Christi award from Catholic Social Services, given annually at the Celebration of Caring banquet. The award is given to a person who exemplifies love of neighbor as demonstrated by the Heart of Christ. In September of 2002, Sister Mary Philips celebrated her 74th anniversary as a sister. Sister Mary Philips and Sister Mary Douglas Hahn were the last two BVM Sisters to teach at Sacred Heart Catholic School.

The school started charging tuition in 1997 but had been able to keep tuition rates low. Sacred Heart Catholic School was committed to providing a Catholic education for the children of every family who desired it regardless of financial ability. The parishioners of Sacred Heart and other supporting parishes had been very generous in donating funds for tuition assistance whenever it is needed.

In 2004, Ms. Sheri Dishon took the helm until 2007 when Sister Bernadette Radek, M.S. returned as principal from 2007 to 2010. Ms. Denise Ray was principal from 2010 to 2011. Ms. Laura Knaus took over as principal in 2011. Under Ms. Knaus, Sacred Heart Catholic School offered a Classical Catholic education to a diverse group of students. It was the mission of the school to form responsible Catholic Christians by working, with God’s grace, to develop each person’s spiritual, intellectual, physical, social, cultural, and emotional growth potential to the fullest in this life and in preparations for the life to come. Ms. Knaus served as the acting principal of Sacred Heart Catholic School until 2019.

The 2018-2019 was the final year of service for Sacred Heart Catholic School as a chapter was closed. Due to several factors, the long-term financial sustainability to operate the school was not foreseeable. Sacred Heart Catholic School consolidated with surrounding Catholic schools beginning with the 2019-2020 school year. Sacred Heart Parish continues to help fund a Catholic education for parish families who are continuing their children’s education at other Catholic schools within the Diocese of Lincoln. 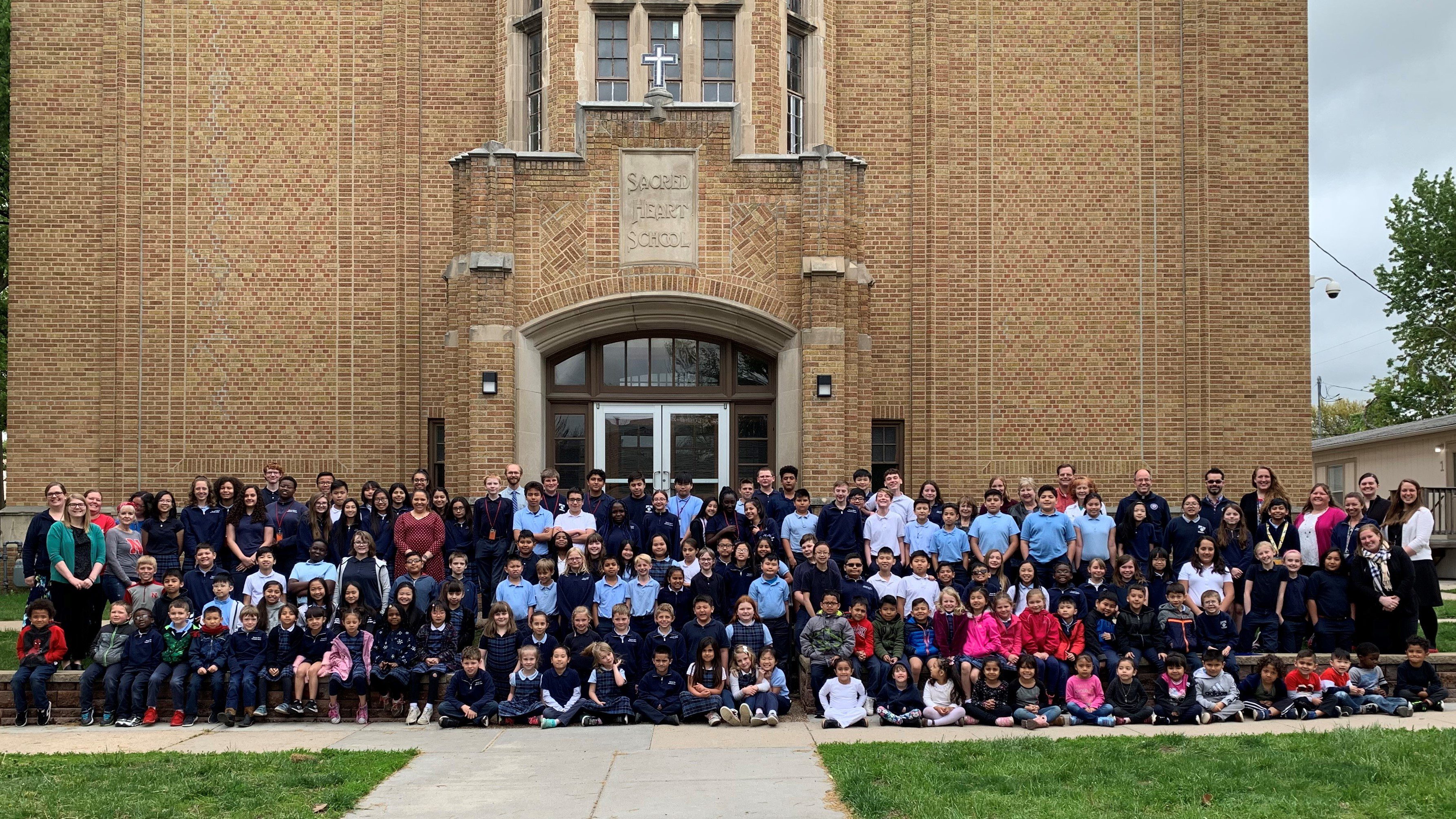 Sacred Heart Catholic School closed its doors for the last time on May 23, 2019.